It's a part of history, and now it is owned by Clay residents. Chalkville Bryant Park is one of the oldest baseball parks in the nation. The field is now being used by little league soccer. The Chalkville Civitan Club donated the property to the city in 2007. The club still meets in the small building. A building with restrooms is planned for the future. 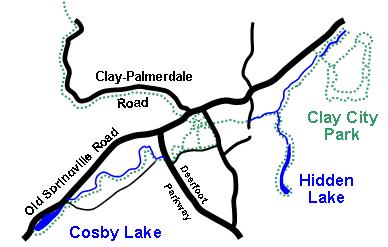 The city of Clay is now working toward creating a network of sidewalks and walking trails to start at Clay City Park and go all the way to Cosby Lake Park.

By 2011, two segments of the sidewalks, planned to encircle the town center area, were completed. These include one segment along Deerfoot Parkway and another segment along Cougar Drive.

The second phase design has been completed for the walking trail from Clay City Park to Trussville Clay Road.